Isaac’s Fine Jewellery is owned and operated by Isaac Cohen. Isaac who is based in Boca Raton, Florida has been in the jewellery industry for over 30 years providing the highest quality designs and bespoke items for his discerning customers. 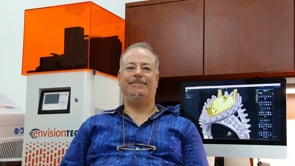 Why use 3D printing for jewellery manufacturing?

Prior to 3D printing, Isaac was using traditional hand-carved waxes or service bureaus to build expensive prototypes. The hand-carved wax was hard to manage, with a great deal of skill required to achieve even close to a consistent, symmetrical shape.
Isaac discovered other jewellers were starting to use CAD and 3D printing. Realising its benefits and that it was the future, he initially embraced 3D by purchasing a Formlabs branded machine and materials in June 2015.

Digital was the way to go, it was first faster and second resulted in better service for the client. Digitalisation allowed him to quickly transfer the hand-sketched concept designs that he’d discussed with his client into CAD. Then, using the 3D Printer he could quickly produce prototypes for the customer to see. Once they were happy, the final designs could be printed and sent to the casting house. After casting, Isaac buffs the piece to a mirror shine, sets the stones and final polishes it prior to presentation.

Why change to EnvisionTEC 3D printers for jewellery manufacturing?

After a number of years using the Formlabs machine, Isaac saw the cDLM series from EnvisionTEC, and immediately saw the difference that the industry leading machine could bring to his customers.

Isaac said: “The Formlabs machine was a good starting point and proved that the 3D concept worked. But having seen the cDLM technology in action I realised it was time to step up and upgrade. The cDLM 3D printer and Easy Cast material provide both a superior finish and exceptionally fast prints, that outstrips any of its rivals.”

Isaac now produces rings, pendants and other jewellery in a fraction of the time of traditional methods and his previous 3D printer. The Vida cDLM provides a large build area allowing the production of large items such as bangles, and in addition to its exceptional speed, provides the best surface finish in the market today. EnvisionTEC’s combination of 3D Printers and its range of exclusive materials provides Isaac with a real competitive edge.

“The cDLM 3d printer and materials provide both a superior finish and exceptionally fast prints, that outstrips any of its rivals.” – Isaac Cohen

EnvisionTEC is a leading choice among goldsmith jewellers, and custom and large manufacturers for 3D printing jewellery patterns for casting. Their technology and materials together offer superior detail, precision and a smooth surface finish that requires less finishing.

Is it time for you to consider your current jewellery manufacturing work-flow? Talk to us about your situation.